Feel free to browse our selection of rare and out-of-print books! 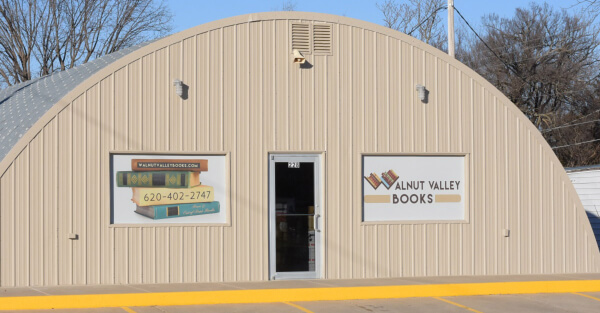 On Monday September 9, 2019 Walnut Valley Books had its opening at 228 West 19th Street in Winfield, KS. At present we stock about 3,000+ books in the store and are adding more every day.  Our online listings of rare, and collectable books continues under the name of Books by White on AbeBooks and Walnut Valley Books on Biblio where we have over 4,000 books listed. Historically I have specialized in military and history but with the collections we recently purchased we have a large stock of books on religion, gardening, psychology/self-improvement, U.S. Presidents, reference books, literature, and language arts. We are open from 10:00 AM to 6:00 PM Monday, Tuesday, Wednesday, Friday, and Saturday. Stop in when you are in Winfield and browse our shelves.

You Can Find Our Books on
AbeBooks.com and Biblio.com! 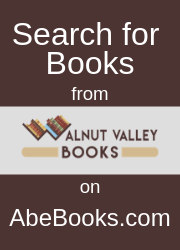 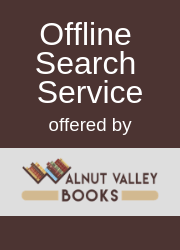 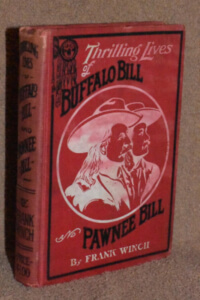 S.L. Parsons and Company, New York, NY, 1911. Hardcover. Condition: Fair. No Jacket. 2nd Edition. S.L. Parsons and Company, New York. 1911. Hardcover. Stated 2nd Edition. Inscribed by Cody on the FFFP as both W.F. Cody and Buffalo Bill and by Lillie as G.W. Lillie and Pawnee Bill. Also titled; Thrilling lives of Buffalo Bill, Colonel Wm. F. Cody, Last of the Great Scouts and Pawnee Bill, Major Gordon W. Lillie White Chief of the Pawnees. Book is square, unmarked but for former owner name on the dedication page, split signatures at page 97. Book Condition: Good- VG-; moisture exposure to front board causing red color to bleed in the white; light wear to cloth at tail, and tips from shelving; tearing of cloth at head from pulling; clean interior/no foxing/no split hinges. Missing one photo on page 128. No DJ. Red cloth boards and spine with bright black and white lettering and picture in white on front board. 224 pp 8vo. This was signed by Cody and Lillie at a show in St. Louis from 1-8 october 1911. The book features alternating chapters about William “Buffalo Bill” Cody and Maj Gordon Lillie known as “Pawnee Bill”. Both starred in the Wild West Show where Winch was the chief publicity agent. A clean presentable copy of a rare double signed copy by both Cody and Lellie. Inscribed by Author(s). Seller Inventory # 005041 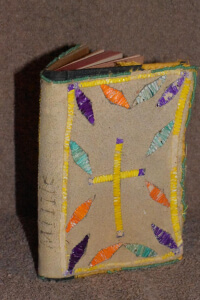 Thomas Whittaker, New York, NY, 1889. Hardcover. Condition: Very Good. No Jacket. Thomas Whittaker, New York. 1889. Hardcover. Probably the 5th printing of the 1884 original. Book is tight, square, and unmarked but for name of former owner who received the book as gift on 12/25/1886-gift card is laid in. The book is written in the transliterated English letters of the Dakota language. Book Condition: VG+ maybe Near Fine; from what can be seen under the hand-made Indian book cover. No DJ. Black boards and spine with gilt lettering on spine and embossed cross on the front board. The book has a hand-made bead, dyed porcupine quill, and animal hide book cover that slips over the boards; has stitched leather closure on the front and Millie written on the spine. This is very likely turn of the century genuine Indian work. There is no foxing; the hinges are not split; the boards are not worn; there is no marking on the pages; there is no moisture damage. This book contains in the Dakota language the following subjects; The Christian Year; The Communion of Saints; the Church; The Sacraments; Offices of the Church; Missions and Charities; Special Seasons; Redemption; The Christian Life; The Judgment; Heaven, and Miscellaneous. A clean beautiful book in an original Indian hand-made religious cover for the book. Seller Inventory # 005046

Across the Plains in '64

National Printing Company, Omaha, NE. 1904. Hardcover. First Edition. Signed by the author on a Nebraska National Bank deposit slip on May 5, 1908 (when he was 69 years old) and pasted on the front pastedown. The book is tight, square, sound hinges, and unmarked but has the former owner’s name signed (he was W. T. Buchanan who was a pioneer/freighter/Indian trader/furtrader/merchant in Nebraska in Camden and Crete, NE) in pencil on the FFFP with several corrections he made to scattered areas in the text. It is possible this man knew John Collins. Book Condition: VG; light wear to the head, tail, and tips from shelving; bumped tips. No DJ. The author states that he has sketched some of his experiences in the West before the days of the railroad from diary and memory. Topics are ; Incidents of early days west of the Missouri River–two thousand miles in an open boat from Fort Benton to Omaha-reminiscences of the pioneer period of Galena, General Grant’s old home; life at Fort Laramie Wyoming where he was post trader; Indian affairs, Sioux Indians; Sitting Bull, Crazy Horse’s bones. A clean, rare, and very presentable copy. Bookseller Inventory # 005042 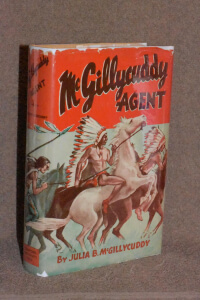 McGillycuddy Agent; A Biography of Dr. Valentine B. McGillyCuddy

Stanford University Press, Stanford University, CA, 1941. Hardcover. Condition: Good. Dust Jacket Condition: Very Good. 1st Edition. Stanford University Press, Stanford University, CA. 1941. Hardcover. First Edition. Book is tight, square, and unmarked. Book Condition: Near Fine: light bottom board edge soiling. DJ: Good; NOT Price clipped; tape repairs to both flap edges; chipping and missing small pieces along the top and bottom jacket edges. Beige cloth boards and spine with a bright red title on spine and front board with a plow and peace pipe in red. 291 pp 8vo. First a doctor in the Indian Wars and later the head of the largest Indian Agency in the country where he handled 9000 Sioux Indians with the help of the US Army. In this epic of frontier life you will see the Red Man baffled, rebellious, wanting only to hunt and fish on his plains and mountains but shunted form place to place as the white Man marches his civilization across the land. A true tale of the Old West. A clean very presentable copy in a Brodart mylar jacket. Seller Inventory # 004955

Scroll back to top